Emma is a violin player and has performed with numerous orchestral, folk and jazz ensembles. She has performed in the UK, Europe and the US, and has recorded three albums.

Emma is a classically-trained violin player (RWCMD) and has a wealth of experience as an orchestral player, having performed many symphonic works with a number of orchestras in the UK. She is a confident orchestral musician with experience of sectional leading, and has also performed classical string quartet repertoire and solo 20th Century works on violin.

Most recently she has been a member of the Bishop’s Stortford Sinfonia and Salisbury String Quartet, and previous ensembles include:  Sinfonia Cymru, Opera at Craig-y-Nos Orchestra , Orchestra of RWCMD, Torbay Symphony Orchestra, Wales’ Philharmonic Orchestra, Exeter Music Group, plus a range of one-off orchestral performances.

She has performed contemporary classical music by Thomas Ades, Peter Sculthorpe and David Bedford, as well as being jazz violinist in Ahoy! By Alexander L’Estrange and Jazz Psalms by Scott Stroman. Emma is equally confident learning music by ear and improvising with a group, and has a number of fiddle tunes from the UK, Eastern Europe, Scandinavia and Tunisia in her head, ready to play at a moment’s notice!

Emma has also developed a portfolio of performance work within other genres, most significantly folk music of the Britain and Europe. As a fiddle player she has toured with two Welsh folk bands in festivals spanning the UK, but also in France, Germany and the United States. 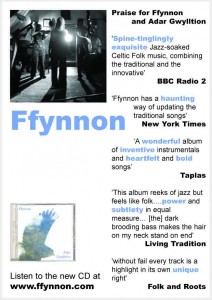 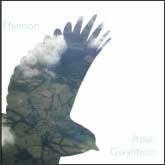 “What a combination! Ffynnon have concocted a brew here that is both traditional and radically their own, combining many strains into a consistent whole, presented with outstanding musicianship. CD is both unique and defines the best in Welsh and Celtic music today.” JK, Celtic Beat

“The quartet experiment, improvise, include other traditions … the strength .. lies precisely in their innovation and absorbing other influences” Folk and Roots

Off The Map (Steam Pie Records)

“Welsh traditional music has a sound all its own, and this is as good an introduction to the music as I’ve heard” Jim Lee, Dirty Linen

“One of the best Celtic bands in Wales” Matthew Blythe, South Wales Argus

Music ability to learn by ear, secure sight-reading, improvise with others, transpose and transcribe music by ear, arrange, compose and conduct musical repertoire.