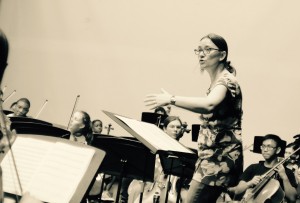 Emma has conducted instrumental ensembles of professional players, amateur adults and young people in orchestral classical music, folk, jazz and musical theatre.  Emma is a multi-instrumentalist and draws upon her knowledge of many instruments to engage and support musicians in their ensemble playing. She uses careful repertoire selection and skills in arranging music to create oppportunities for young and amateur players to experience the very best orchestral music in the most authentic way possible. She has composed and arranged music for bespoke instrumental ensembles,  is equally at home playing from notation and by ear and moves between the two fluidly in her musical leadership, encouraging players develop their own musical flexibility.   She has inspired many people to learn new  instruments, and others to stick to theirs. Her enthusiasm for music-making has been described (a few times now) as infectious! 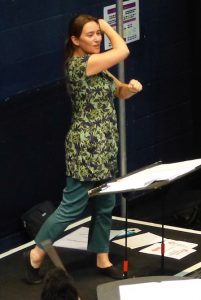 During 2018, Emma was principal guest conductor of the Harlow Symphony Orchestra

‘Her attention to detail, and determination to achieve the best possible interpretation and delivery of every piece we have played with her, have impressed us all’.

Orchestras for All, Artistic Associate 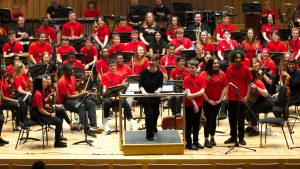 Emma is currently part of the conducting team at Orchestras for All – a youth music charity which has at its core a 100-piece inclusive, national orchestra of teenagers: the National Orchestra for All. Emma also conducts some of the Modulo events, which bring together young players from different schools across the country in a day of massed-orchestral music-making.’

Emma has most recently conducted the  National Orchestra for All in their Spring Course at the Birmingham Conservatoire, a programme that included the world premiere of Orchestra of Overheard Conversations with musical ideas created by the young people in workshops led by Fraser Trainer which were then weaved into a final piece by composer Danyal Dhondy and poet Kit Finnie.

‘watching you work was a masterclass in leadership and kindness’ 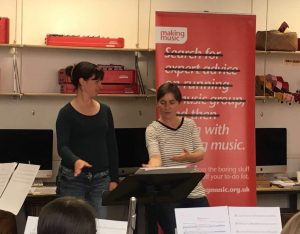 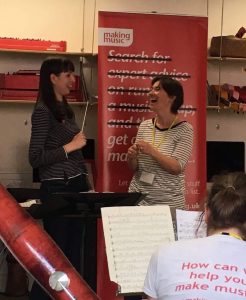 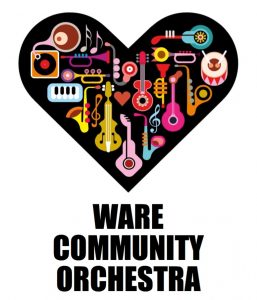 Emma is the founder and music director of the Ware Community Orchestra. In March 2017, Emma set up a one-off orchestral music-making day; the Ware Pop-Up Orchestra. This day aimed to give rusty players the chance the dust of their instruments and get back into playing by being part of an orchestra just for a day. The event attracted 36 musicians ranging in age from 8 – 80 and appeared to be very much enjoyed! At the end of the rehearsal, talk turned to ‘shall we do this again?’ and so Emma set the dates for the Ware Community Orchestra to meet. We agreed that Sunday afternoons were best, and monthly was good, and so that’s what the WCO do!  Emma is the conductor and arranges the music so that the orchestra is inclusive to all abilities. Find out more here.

‘There was such an amazing energy in the group and it was lovely to play again, especially in such a welcoming environment – Thank you for your warm welcome and excellent coaching – I  loved the way you led the rehearsal – I’d also be happy to donate to your prosecco fund. Definitely well worth it!! 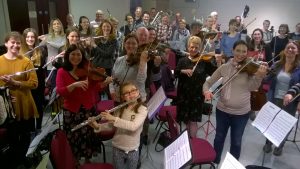 Until recently, Emma was the conductor of the Bishop’s Stortford Youth Orchestra and string ensembles run by the Hertfordshire Music Service.

‘we were impressed how you inspired the string groups’

Night on a Bare Mountain – Mussorgsky

Jupiter and Mars from The Planet Suite – Holst

A day of workshops and performances with students from Birchwood High school and a chamber ensemble from the Bishop’s Stortford Sinfonia. The day focused on Peter and the Wolf and included a chamber performance of Prokofiev’s work as well as orchestral side-by-side workshops and a performance by the young players at the end.

Other Orchestral Repertoire, other ensembles

The Wizard of Oz, Cabaret, Oliver, Fiddler on the Roof, Bugsy Malone, Into the Woods, Billy Elliot, How to Fail at Being Perfect (new commission composed by Emma Oliver-Trend and Nele Van Der Broeck)

‘An amazing conductor for orchestra – Thank you for bringing real orchestra back – You’ve inspired so many people – Best conductor ever! – A fantastic concert!! Very high quality music-and the hall was full’ 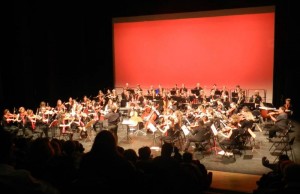 Three instrumental ensembles of young people from three towns; Sawbridgeworth in England, Bry Sur Marne (France) and Moosberg (Germany) came together for a weekend of music-making as a large orchestra of 100, culminating in a grand concert to an audience of over 500 in the theatre in Le Perreux, Paris.  The young groups from England and Germany provided brass, wind and percussion alongside the formidable Violons De Bry in a programme of classical music that included Tchaikovksy, Ravel, Mozart and Elgar. 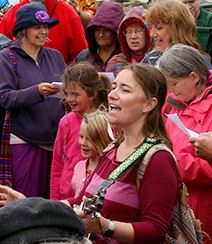 Emma is a vibrant and vigorous folk ensemble director with a commitment to creating highly charged and energetic arrangements of folk tunes that are full of funk, soul and bubbles! Emma has very quickly engaged lots of students into her folk bands which mostly feature rollicking fiddle tunes with stabby brass, scanking guitars and breakbeat drums. Ensembles are rich with student-leadership with young musicians teaching each other by ear and developing their own parts in the arrangements. Students are encouraged to improvise and stretch their musical ability through experimenting. Repertoire is learnt by ear, and includes new arrangements of East European gypsy tunes, Klezmer, Russian Dance tunes, British Isles jigs, reels and hornpipes. Please contact Emma to hear examples of the folk bands that she has led.

Comments from folk band participants and audiences: You inspired me to take music seriously –  It’s wonderful to hear the energy – – Thank you for all your enthusiasm. It has really brought my interest in music back – Your enthusiasm is definitely contagious – We will miss your everlasting energy and fun spirit.

Emma is an energetic and imaginative music animateur. Through teaching, workshops and projects, she has developed a range of ways to bring music alive for others. She has planned and led creative music workshops and projects, collaborating with drama, dance, film and visual artists. Emma plans for full participation and engagement, has experience of creating music and performance with diverse community groups including young people and adults and has good quality music-making at the heart of all her work.

Sidrocks: Singing the Geology of Sidmouth

A NEWLY-COMPOSED SONG CYCLE ABOUT THE JURASSIC COAST, PERFORMED ON THE SEAFRONT EVERY YEAR DURING SIDMOUTH FOLK WEEK 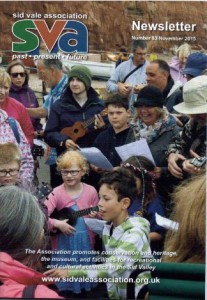 Sidrocks is a community singing and playing project devised and led by Emma and geologist, Dr Roger Trend on behalf of the Sidmouth Museum. A song-cycle composed by Emma about the geology of the Jurassic coast, as seen at various points along the Sidmouth coastline. In its third year, the event in 2015 attracted 80 participants aged 1- 70+ in the geology walk with 40 singing and playing instruments. 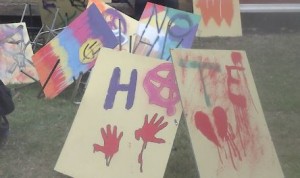 A devising project for 24 students aged 12-18 from three secondary schools in Hertfordshire, who worked together over Spring and Summer 2015 to create a brand new opera from scratch. Students assumed all the company roles and the opera created was a site specific promenade piece telling the story of Danny, the new boy in school.  The piece included a series of newly-written songs accompanied by a 5 piece student band. The libretto was entirely sung. This project was based on the ROH Write an Opera programme and was delivered in partnership with Royal Opera House Bridge and the Catalyst Schools Consortium.

PERFORMING ARTS STUDENT EXCHANGE BETWEEN SCHOOLS IN DEVON AND INDIA

A week-long performing arts residency based on Hamlet in a small school in rural Kolkata with 65 residential pupils and students and teachers from KEVICC Secondary school in February 2011. The exchange also included a visit to Devon by students and staff from Matheison, and a collaborative performance was devised including musicians and dancers from both schools.

Read more about the exchange project with the Matheison Music School

A small ensemble of Year 10-12 students compose new music,  for 30-minute performances of Shakespeare plays; Midsummer Night’s Dream (2015), The Tempest (2013) performed as part of SSF. Students have used Baroque music as a starting point for some elements of their work, but have also composed music entirely from scratch, using leitmotif and improvisatory soundscape to help create atmosphere and tell the story.

A contemporary music secondary schools project devised and produced by Emma working with composers James MacMillan and Lynne Plowman to devise creative composition workshops in secondary schools preparing young people for the tour of performances in venues across Wales in 2006. As part of the performance Emma directed a multi-camera live feed film onto a large projection screen behind the orchestra,  providing the audience with a deeper insight into the role of the conductor (MacMillan) and the professional instrumentalists of the orchestra of WNO. The programme included two of MacMillan’s most celebrated works for orchestra; The Confession of Isobel Gowdie and Britania. Emma also wrote the Teacher’s Support Pack with many chapters to help teachers and students to explore and extend their understanding of the music including a breakdown of the specific orchestra used, a detailed analysis of the repertoire with listening signposts, classroom and independent learning tasks and extended 20th Century listening ideas.

AN OPERA ON FILM BY RICHARD AYLWIN AND RICHARD CHEW

The creation of an opera on film, performed by adults and young people with profound and multiple learning difficulties and their carers in 5 special schools and centres across Cardiff. This project had many objectives, and had the work of The Touch Trust, resident in Wales Millennium Centre at its very heart. Other collaborators included Diversions Dance, Hijinx Theatre, The Urdd, and the WMC. Bringing together all of its founding residents, Through Listening Ey 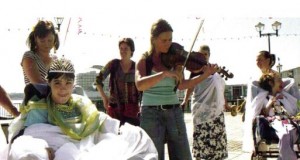 es was premiered as the very first performance on the open day of the Wales Millennium Centre, 2004 and also won first prize in Canada’s International Disability Film Festival.

Read more about the Through Listening Eyes project

With performance skills in strings, woodwind, brass and percussion, Emma confidently leads multi-instrument groups within classroom settings, where students learn a range of instruments in small groups, including violin, viola, cello, trumpet, tenor horn, flute, clarinet, saxophone, recorder and xylophone within one class. This is a teaching strategy and programme that Emma has been developing over the past few years, building upon the Wider Opps and First Access experiences that students often receive in primary school, and she has created numerous class orchestras with students who have only learnt their instruments in the classroom. Emma has composed her own bespoke music to support this style of learning, composing specifically differentiated parts for each instrument group and individual students. Please contact Emma for examples of her bespoke compositions for the classroom and a copy of the programme outline.