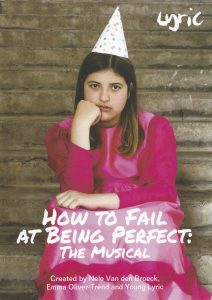 It is the year 2038. In London, only very busy people survive.

These people don’t have time to raise their own children. But every now and then, they feel they need a child. Where do the people of London go when the need for a child arises? They go to Neverland Enterprise! CEO Peter Pan and his fierce assistant Tinkerbell train the perfect lease children for every occasion.

When Wendy Darling, tired of being ignored by her own dad, decides to join Neverland Enterprise, it doesn’t turn out quite as she expected it would. It takes a lot of work to be perfect Maybe she should join captains Hook’s gang of pirates instead?

Following a week of research and development in February 2017, Nele and Emma co-wrote this new musical especially for the cast and band of Young Lyric members. It was produced by Young Lyric forming their Summer musical theatre course in August 2017. 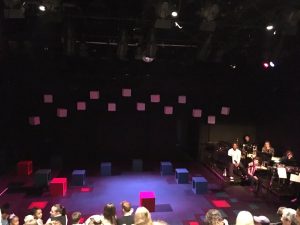 How to fail at being perfect was written for a cast of 20 and band of 6 young players. There are 5 lead roles, with solo vocal parts. The score includes solo songs, duets and chorus songs. Some have harmonies and backing singer parts. The musical score includes a wide range of genres with incidental music that uses modern classical techniques but with songs that represent popular music from a range of periods including Shadow’s rap, Tinkerbell’s patter song, Co-Parenting 80’s style ballad duet, the saccharin and very cheesy Neverland Enterprise Commercial. It’s a mix of musical styles, and many of the songs are tongue in cheek, to say the least! The orchestral score is for an usual combination of instruments (flute, violin, melodeon, trombone, tuba, tuned and untuned percussion, piano/keys), as Emma composed it for the young players who wanted to take part, but it could be re-edited to become a flexible score. The level of the instrumental parts is approximately grade 4-6.

To find out more about this music, please contact Emma, or the Young Lyric at the Lyric Hammersmith.